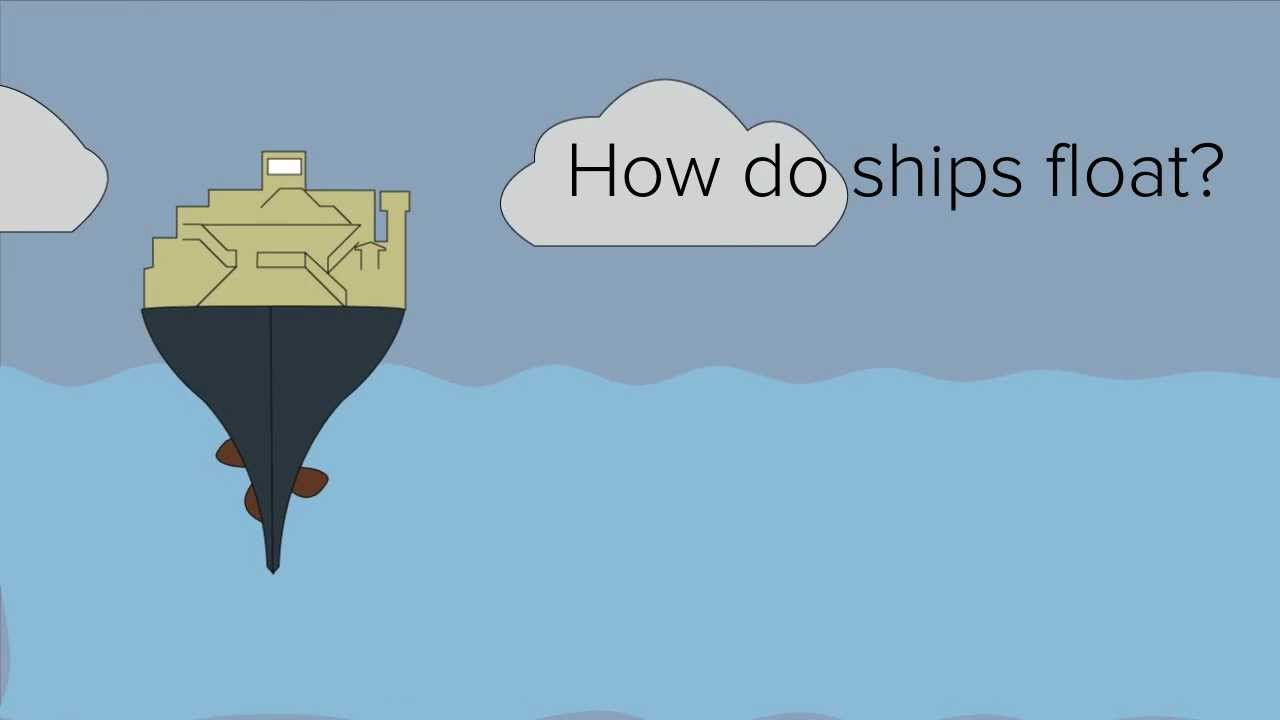 I bet everyone would have ask this question to themselves at least once in a lifetime. Even my grandfather asked me this question. Well it feels good, even such old people are as curious as small kids..Hehe

The thing which is known to us is – if the material’s density is more than water then it would sink to the bottom. But then how the hell, the ships made from steel & iron(which are very much denser than water) float ?
So lets explore…

Archimedes – who ran naked on streets due to excitement saying “Eureka…Eureka..!“(which means – I have found it) the whole time when he found the solution for the problem he was given to solve by the king to check the purity of crown. The problem was solved with the concept of buoyancy.
The Archimedes principle states that,

The upward buoyant force that is exerted on a body immersed in a fluid, whether fully or partially submerged, is equal to the weight of the fluid that the body displaces.

Basically, when will the object float ? –
When the weight of a body or object is less than the weight of the fluid it displaces !!
According to Archimedes principle, if u take a cube of volume 10 cubic meter weighing 20 metric tons & just push it into a lake, a buoyant force of 10 metric tons will push the cube upwards. So,

How do ships float ?

Assume we are gifted a cube, made of steel, weighing 20 metric tons & having a volume of 10 cubic meter.

Case A – When the cube sinks

We take the cube & toss it off into a sea nearby. What happened ? A big splash & cube straight to the bottom. Well our cube having weight 20 tons, displaced 10 cubic meter of water & an upward buoyant force of 10 tons; Archimedes principle. So we have 10 tons more weight pulling our cube down than the buoyant force pushing upwards & our cube sank. In other words, THE CUBE’S WEIGHT IS MORE THAN THE WEIGHT OF WATER IT DISPLACED !

Case B – When the cube neither sinks nor floats

Now take the same cube weighing 20 tons & make some changes in it’s design. This time it’s volume is 20 cubic meter. Now we toss our cube again having same weight but a different volume. Again a big splash & yea just near to the surface of water. It is inside the water but it doesn’t sink. This is also called neutral buoyancy.
Here, THE WEIGHT OF OUR CUBE IS EQUAL TO THE WEIGHT OF WATER IT DISPLACED.
But oops, it is of no use… so we pull it up again & continue our research.

Case C – When it FLOATS

This time, again improvising the design of cube & increasing it’s volume to 30 cubic meter keeping the weight 20 tons. Back to the sea with tons of excitement, we toss it again & what ? – IT FLOATS !
Congratulations, you just made a ship which doesn’t look like a ship. Butttt, what matters is – It floats. This time THE WEIGHT OF OUR CUBE IS LESS THAN TO THE WEIGHT OF WATER WHICH IT WILL DISPLACE.

And done, here we go, keeping the weight same we made it float.

Now even if some people just get on-board on our ship, don’t worry ! Our ship will get more submerged into water, but f*ck yeaa… it still floats & that becomes a Cruise ship; add cargo on it & it becomes a Cargo ship.

Now if u still wanna walk on water, you know what to do, just increase your volume by maintaining the same weight. Now how to that – it’s your problem ! 😛