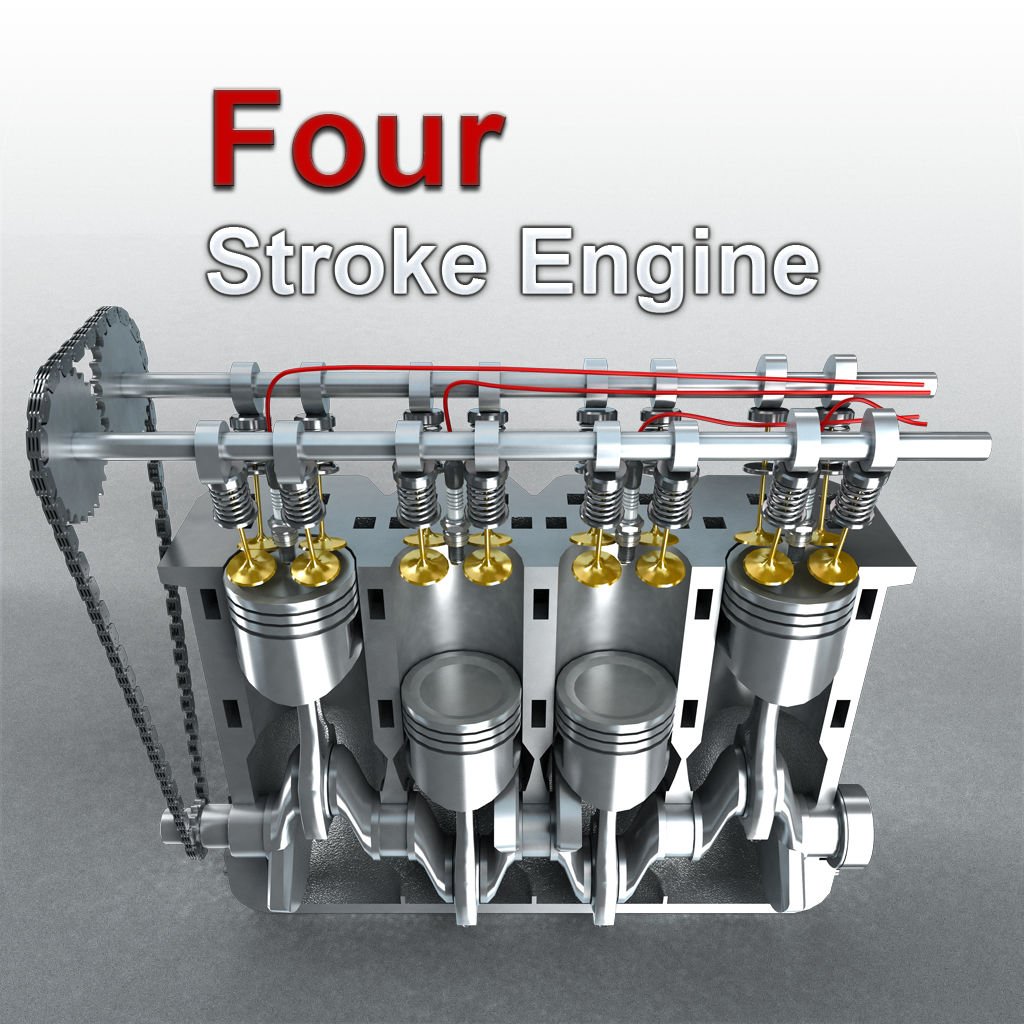 These are the most basic engines used in cars & bikes i.e Four stroke cycle petrol engine OR 4 stroke engine(often called). It is very easy to understand until & unless you wanna do all the thermodynamic calculations & all that stuff !

The name itself gives us an idea – it is an Internal Combustion Engine where the piston completes 4 strokes while turning the crankshaft twice. A stroke refers to the piston travelling full in either of the direction. A cycle gets completed when all the 4 strokes get completed. The four stroke engine was first demonstrated by Nikolaus Otto in 1876, hence it is also known as the Otto cycle.

Let us come to the parts which a 4 stroke engine has,
Piston – In an engine, piston is used to transfer the expanding force of gases to mechanical rotation of crankshaft via a connecting rod. The piston is able to do this because it is secured tightly within cylinder using piston rings to minimize the clearance between cylinder and piston !
Crankshaft – A crankshaft is a part which is able to convert the reciprocating motion to rotational motion.
Connecting rod – A connecting rod transfers motion from a piston to crankshaft which acts as a lever arm.
Flywheel – Flywheel is a rotating mechanical device which is used to store energy.
Inlet & Outlet valves – It allows to enter fresh air with fuel & to exit the spent air-fuel mixture from the cylinder.
Spark Plug – A spark plug delivers electric current to the combustion chamber which ignites the air-fuel mixture leading to abrupt expansion of gas.

In this stroke, the piston moves from TDC to BDC [(Top Dead Centre – the farthest position of piston to the crankshaft) to  (Bottom Dead Centre – the nearest position of piston to the crankshaft)].
The piston moves downward sucking the air-fuel mixture from the intake valve.
Key points :-
Intake valve – OPEN
Exhaust valve – CLOSED
Crankshaft rotation – 180°


The second rotation of crankshaft has begun as it completes one full rotation during compression stroke. Power stroke begins with the expansion of air-fuel mixture ignited with the help of spark plug. Here, the piston moves from TDC to BDC. This stroke produces mechanical work to rotate the crankshaft.
Key points :-
Intake valve – CLOSED
Exhaust valve – CLOSED
Crankshaft rotation – 180° (total = 540°)

How do inlet & outlet valves open & close at that particular times of strokes ?

Well, they are not  timed with a help of timer or clock (humour me). The answer is so amazing & solution is damn easy – Camshaft !
The camshaft is connected to crankshaft via a gear mechanism or meshed with the help of timing chain.

Above animation – A cam on a camshaft converting rotational motion into oscillatory motion of valves thereby opening & closing the valves at the exact times. Source

Again, it proves that sometimes all we need is simple design.

Spark plug is only used in petrol engines & so used here. Diesel engines don’t have spark plug. The mixture is so highly compressed that it is able to ignite itself.

The answer is when you insert your key into your car to turn “on”, the battery turns a small motor which is meshed with the larger gear of the flywheel. Thus the engine starts by sucking air-fuel mixture into it & then follows the above cycle.

Here is the video how engines start ?