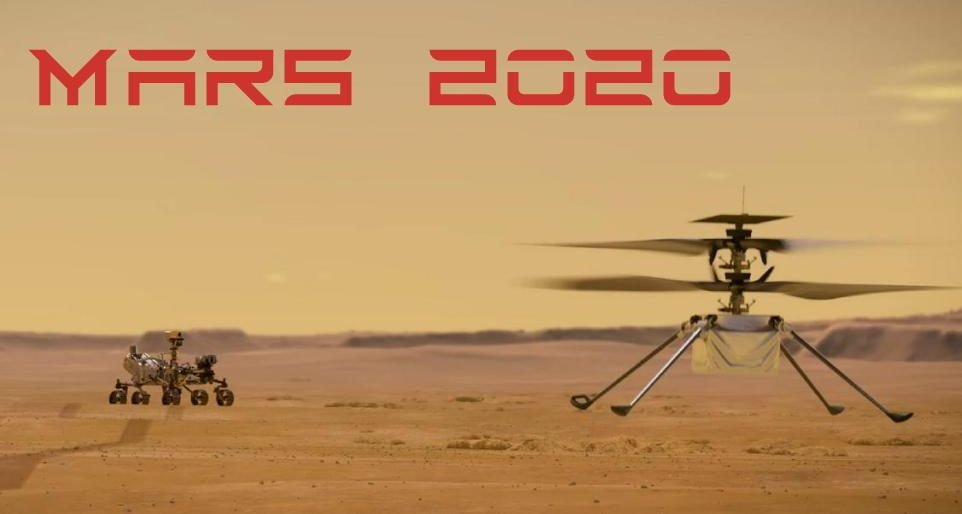 All the above goals relate to the potentiality of Mars being a place for Life. I remember, 2 years ago, I posted an article on the 2020 rover mission and asked you to suggest the name of its 4th rover & here it is – Perseverance!

The rover design is completely derived from its predecessor- Curiosity. It will carry some extra instruments in addition to what Curiosity has, making it 13% more heavy(1025 kg). Curiosity’s wheels have taken a lot of damage while collecting samples and exploring the Martian surface. Thus, the engineers decided to make Perseverance more robust & durable by making its aluminium wheels thicker and increasing the wheel diameter by 2.5cm.

A Multi-mission Radioisotope Thermoelectric Generator(MMRTG) will be used to power the rover along with 2 small lithium-ion batteries to meet the peak demands of rover activities. The thermoelectric generator uses plutonium dioxide as a source of a steady supply of heat which is then converted into electricity. The main reason for using MMRTG is that it could operate for at least 14 years without any interruption as well as it gives the rover immense flexibility in operating instruments during extremely cold nights and weather on Mars.

One more objective of this mission is that Perseverance would conduct a Depot Caching Strategy. The rover would drill and collect 20-30 core rock samples from different places and deliver them at a fixed place. The tubes containing the sample would remain on the Martian surface awaiting pick-up by a future mission & bring back home.
Sounds cool, right? Well.. the coolest part is this – Perseverance will also carry a friend attached to his belly – a helicopter drone named Ingenuity on Mars!

As the first powered flight on another planet, this is going to be a big feat for mankind! It is going to be first-of-its-kind proof of concept flight demonstration, helping us to determine whether the flight technology could be used to explore Mars in the future.

Ingenuity has set of 2 counter-rotating coaxial rotors about a metre in size. The coaxial rotor arrangement helps to cancel out the anti-torque generated and doesn’t need a tail rotor which could be easily found on a traditional helicopter (learn more about anti-torque & types of rotors). The drone is powered by 6 Sony Li-ion cells with a capacity of 2Ah and are charged by the solar panel located on top of it.
Each flight will take no more than 90 seconds, at a height ranging from 3m to 10m, and has the capability to cover a max distance of 600m(watch the video at the end). It will communicate with the rover and transmit data of each flight after landing.

The main purpose of sending Ingenuity is to scout interesting targets for study and check whether flight technology is safe, operable and whether it can provide better mapping and guidance of the Martian surface.
The drone is equipped with high-tech cameras that provide high-resolution overhead images 10x better than taken by the orbiters.

If this mission is successful, NASA plans to build a more sophisticated & a bigger drone having higher payload capacity and flight range. Furthermore, the drone could also inspect, collect data and rock samples from small terrains or steep cliffs where the rovers are helpless.
Pertaining to this mission, Ingenuity is to fly only for 5 flights during its 30-day test campaign.

The mission will take off on 17 July 2020 and has a launch window till the 5th of August. It is expected to land on Mars in February 2021.

DID YOU KNOW – You can even buy mechanical engineering project kits online, here on our website at the lowest prices! Along with that, CAD drawings & PPT presentations. Want to know more about the project? Download Synopsis for FREE 😀

Watch how Ingenuity will take off its first flight!