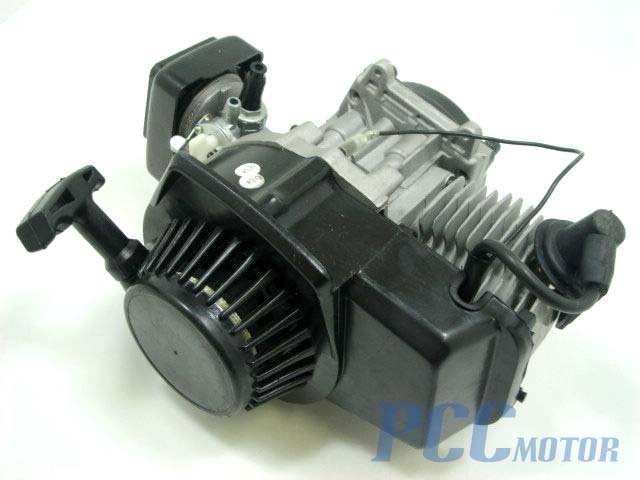 The parts which a 2 stroke engine has –

Piston – In an engine, piston is used to transfer the expanding force of gases to mechanical rotation of crankshaft via a connecting rod. The piston is able to do this because it is secured tightly within cylinder using piston rings to minimize the clearance between cylinder and piston !
Crankshaft – A crankshaft is a part which is able to convert the reciprocating motion to rotational motion.
Connecting rod – A connecting rod transfers motion from a piston to crankshaft which acts as a lever arm.
Counterweight – Counterweight on crankshaft is used to reduce the vibrations due to imbalances in the rotating assembly.
Flywheel – Flywheel is a rotating mechanical device which is used to store energy.
Inlet & Outlet ports – It allows to enter fresh air with fuel & to exit the spent air-fuel mixture from the cylinder.
Spark Plug – A spark plug delivers electric current to the combustion chamber which ignites the air-fuel mixture leading to abrupt expansion of gas.

Two strokes get completed along with one power cycle.

Know What are the differences, advantages & disadvantages of 4 stroke & 2 stroke engine !


The above pic shows another variant of the 2 stroke engine in which the inlet & outlet ports on the same side. Here, there is no need to open inlet ports intermediately. The cylinder head is designed such that the exhaust port is closed during combustion & opens after combustion. The piston itself closes & opens the port accordingly. The process remains the same, difference here is just the design.

You might have observed a protrusion on the surface of piston. This design helps the exhaust gases to flow through exhaust port easily giving it a direction.

As the crankcase is sucking air-fuel mixture continuously, it is practically impossible to lubricate the piston & connecting rod. Therefore the fuel has to be mixed with oil or lubricant(2%-5%) in 2 stroke engine.